Maha Navratri is a 9-day Hindu festival which is widely and exuberantly celebrated throughout India and wherever you will find the Indian diaspora settled throughout the globe. The celebrations and rituals differ depending on the region you are from however they all pay homage to the divine Shakti, goddess Durga and her nine forms (avatars) of power. Out of the many (and I mean many) Hindu festivals in a year, Navratri is one of the few where I actually don’t mind going vegetarian for a while and giving up alcohol and some other vices.

If life did work according to plans than I would’ve been in Kolkata ticking off the famous Durga Puja off my bucket list but of course it doesn’t and my Kolkata trip happened a couple of months earlier than this year’s festival and I was back home for Navratri. In our small community, every night is color-coordinated and everyone wears the same color and each night brings a little message that we tend to forget somewhere along the year.

The following are my nine takes from this year’s Navratri:

According to the Hindu Vedas, we are currently living in the Kali Yug stage of the world cycle. Apparently it’s the darkest, cruelest and the most miserable of times that the human race has gone ever through. And it is now that we are the furthest from finding God within ourselves. There are medical conditions being diagnosed that were never heard of before, crimes committed so horrific that its easier to simply keep walking than trying to help and betrayals so deep that it’s hard to even trust your own family. The only way to get through this pain is through Bhakti (Devotion). To whomever your faith calls you out to or to whichever divine power you feel closest to, one must have faith that there is something bigger and above us all  who are looking out for us.

My primary school had corny proverbs written on top of noticeboards in halls and on blackboards in classrooms and one that got repeated year after year was “Cleanliness is next to Godliness” and I cringe to say that it is true. In this age of hand sanitizers and wipes and sprays that ‘kill 99.9% of germs’ we have taken the shortcut to cleaning. We may be spending tons of money on our decorating our bathrooms but we are spending less time in them. While we have reworked our polymer formulas, we still haven’t worked out how to dispose our man-made rubbish. Path to Devotion is Cleanliness.

There are many types of Seva in the Hindu context and whichever avenue you choose to give your service, it will have to be without any expectations in return hence – selfless. It could scrubbing floors at an ashram, serving soup for the homeless or volunteering at your local community house. Honestly I don’t see scrubbing floors at an ashram as a Seva but contributing some of your weekly pay packet towards a needy child’s education is. How you do your Seva is your choice – it is between you and your God.

If I gave you honesty-is-the-best-policy crap, I’m pretty sure you’d stop reading right here if you haven’t already! This is Kaliyug after all and I reckon this sums up pretty well on how to live honestly in 2013.

“I have found no greater satisfaction than achieving success through honest dealing and strict adherence to the view that, for you to gain, those you deal with should gain as well.” – Alan Greenspan (American Economist)

Side-stepping the whole incarnation angle, Karma is basically reap-what-you-sow. You could spend every morning in meditation, or spend countless hours doing Seva and cleaning the gutters of your neighborhood but if you’re a downright mean person who doesn’t speak with respect to his wife or a dimwit who kicks dogs – you don’t reap any benefits of your devotion or service. Standing for what is right and good deeds is the ultimate key to a good life.

“The person who is always involved in good deeds experiences incessant divine happiness. ” – The Rig Veda

Goddess Lakshmi was probably born (created!) around in June. She’s definitely a Gemini. She’s the goddess of moolah and best described as fickle. Unlike other avatars and Gods, she’s not impressed by your prayers nor your pleas. She darn well comes and leaves as she pleases. Unfortunately there is no kept secret on how to capture her. And take it from me, those money chimes and belly rubbing tubby mans don’t work. Hard work and honest hard work only is the key to your positive bank balance. Lakshmi blesses those who respect the value of their homes not their houses. Go figure.

BE THE BIGGER PERSON

At this very Navratri function, couple of years ago I had told a bunch of men to shut up who were continuously talking throughout an important ceremony. It was a just a bit of loud notice generally and not directed to any particular person. In that group of talking men (unknown to me at the time), was a prominent figure in our community and he…kinda took it personally. Despite him knowing that he was wrong, he spent the next couple of years ignoring me and not having anything kind to say about me. This year I finally bit the bullet and asked him if he was mad at me for something? An awkward conversation and couple of days later, we are back to being the buds we used to be. Sometimes, despite knowing that you are right – you have to be the bigger person. Not everybody has the strength to accept their mistakes and we need to make that leeway for each other. 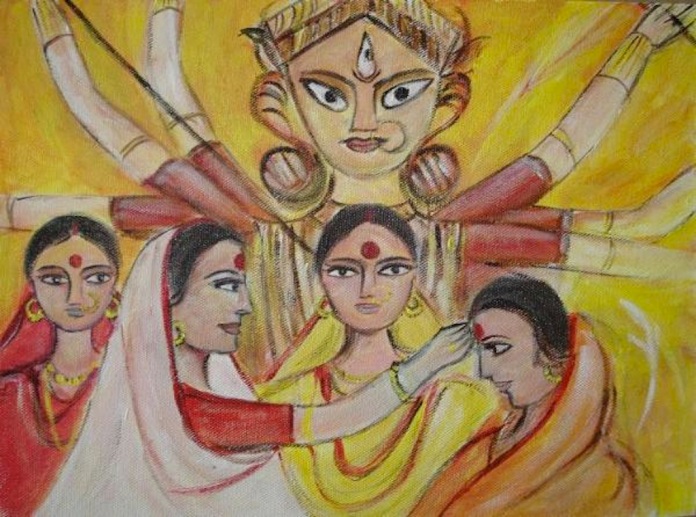 Sony’s “Who Wants to be a Millionaire?” television show in India’s promo tag line is – Seekhna Bandh, toh Jeeta Bandh (If you stop learning, you stop winning.) It’s one of the best slogans I’ve ever heard.

There is no age limit to learn new things. Discover your religion, read about some other country’s history, try out someone else’s recipe. Keep learning – everyday.

I was absently listening to a few older ladies in conversation the other day when one of them commented that a person’s life was meant to be of 3 parts misery and 1 part happiness. Mathematically speaking; Life = (3/4 misery + 1/4 happiness) and I bloody hope to all 9 avatars of Shakti that she is wrong!

But realistically speaking, in our pursuit to be happy we forget that we must have downtime. There will be times when life will be in the dumps and there will be no quick way out of it and that you’ll simply have to ride it out. And it is during this time of our lives when we must hold on to our faith. At times it may be the last thing you want to do but you must continue with your devotion, serve others even though your own heart is breaking and do what is right no matter how many people put you down for it. Why? Because it stops us from completing breaking down, it gives us the strength to keep on going and the hope  in knowing that some divine energy is looking after us. Faith carries us through our sad times to our happy ones.

May you find your inner Shakti this Navratri.

The opinions expressed in this post are entirely mine. The Sanskrit terms and Hindu ideology is a reflection of my interpretation.